Guitarist from Sugar Bytes is a virtual guitar that’s designed to emulate rhythm parts played on an electric guitar.

Guitarist from Sugar Bytes is a virtual guitar that’s designed to emulate rhythm parts played on an electric guitar. 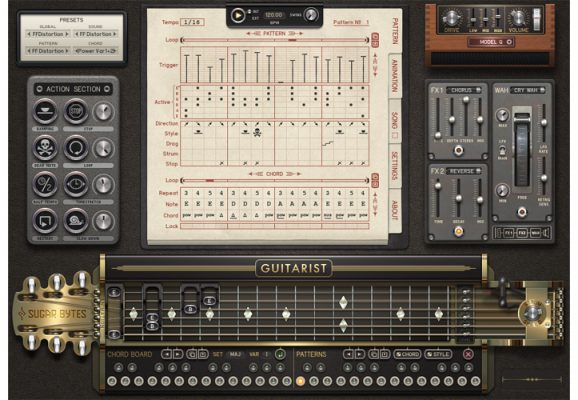 The Patterns page in the centre is actually very easy to use. On 16 steps you can determine if a chord is triggered, which strings are played and if the strum goes up- or downward.

Each string can be played individually at any time, guaranteeing gigantic arpeggios, nuanced metal riffs are also easily done. The damp- and deadnotes make it funky and lively. 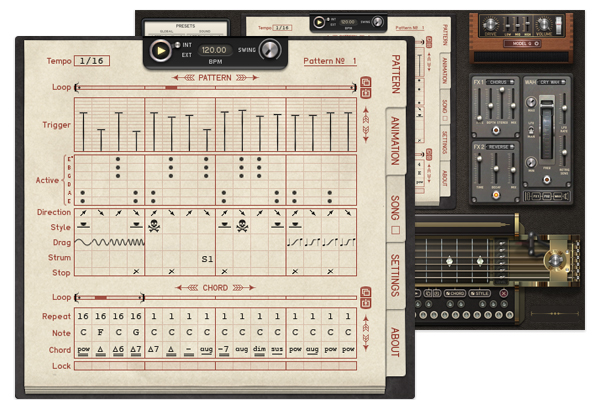 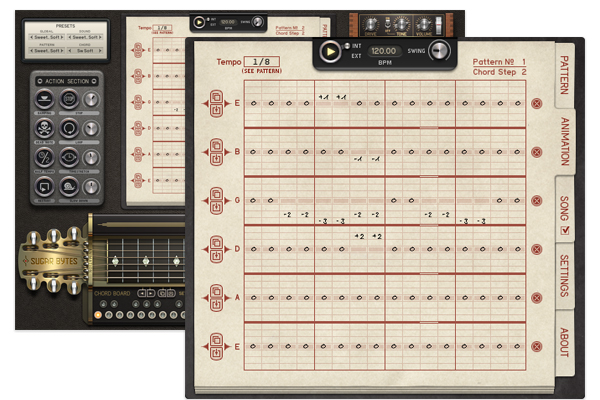 The "Animations" page lets you program extra movements for each of the mechanical "fingers" on the fretboard. A finger can be moved up or down by one, two or three semitones per step, to enrich chords with harmonic elements.

The "Action Section" offers the means for immediate intervention. Loop parts with a press of a button, include dead- or damp notes, half tempo works as well.

The Guitars
Four electric models with more to come

Three different guitars are built in: Fender's Stratocaster and Telecaster are included, along with a Duesenberg Starplayer Special. The Starplayer exists in a "Bright" and "Normal" version.

Each of these beautiful six-strings was recorded with 2,000 samples. Extensive sets of fretted notes and open strings have been sampled, each one repeated several times.

The "round robin" function can alternate the playback of different samples. In Random mode, a sample is selected at random from the available pool for the note triggered. 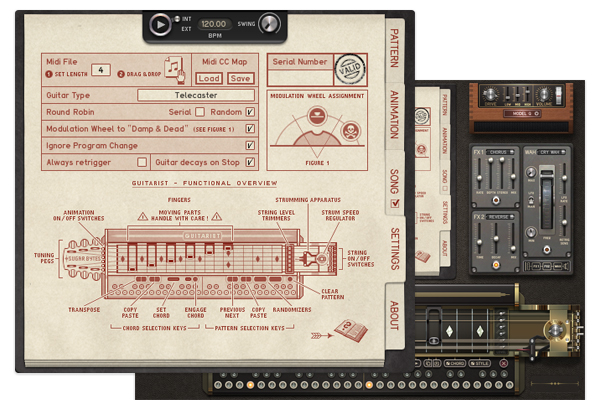 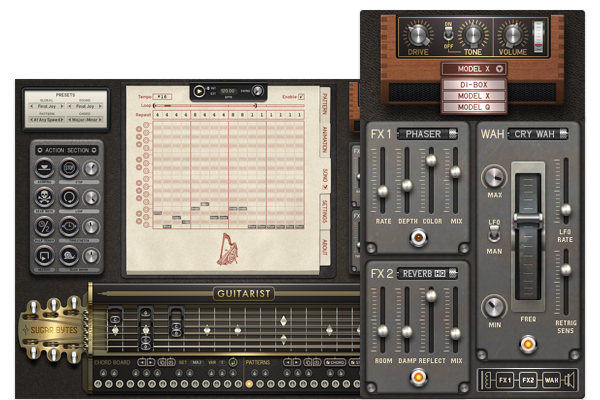 Amps and Effects
Form your sound

Two effect-units with 10 effects altogether provide the colors you are looking for. FX1 specializes in modulation effects, including a very nice Chorus, a throaty Phaser, and "Phase Wah" and "Auto Wah" effects. FX2 does classic delays and reverbs, and a reverse‑buffer delay effect.

Two wonderful sounding amp models are available as well as a direct out mode for your favorite amp-emulator-software.

And there’s the Wah-Wah pedal. This is more sophisticated than the average guitar stomp-box, with an integral, variable‑rate LFO to sweep the effect back and forth (this can be deactivated, and a MIDI controller assigned for manual control). The LFO can be set to retrigger with input signals above a given threshold (another way of producing "auto‑wah" effects), and Max and Min controls allow you to set the upper and lower boundaries of the effect's sweep.

Clever and detailed mechanics
The feature list keeps on giving 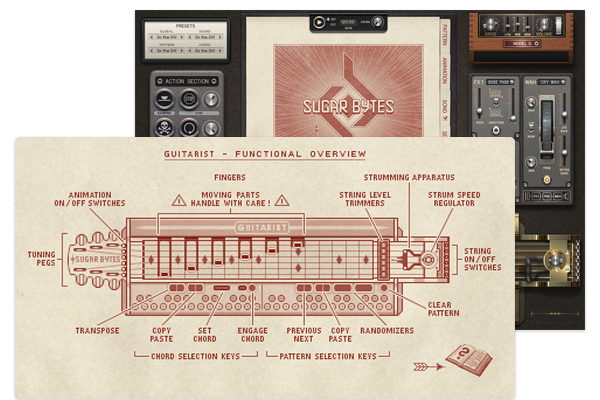 Selecting a Global preset automatically loads the matching presets in the other three categories. However, you can mix and match the different categories, combining the chord progression from one preset with the picking from another, and the effects settings from still another.

User presets of all four types can be created and saved.

Sugar Bytes plug-ins are available in 64-bit editions for both Windows and macOS.

Be the first to review “SugarBytes – Guitarist” Cancel reply