Hollywood Orchestra Opus Edition is jam-packed with 944GB of samples — 130GB of which are brand-new recordings. At ProducerSources, we've found that this library's 18-violin string section vaunts some of the best legato phrasings we've ever heard in an orchestra virtual instrument. You also get new ensembles for Hollywood Brass and Hollywood Orchestral Woodwinds, and new string, brass, and woodwind multi-ensembles. The Opus Edition is a distinct upgrade over EastWest's original collection.

That said, it works seamlessly alongside its predecessor if you want to maintain backward compatibility with your prior projects. 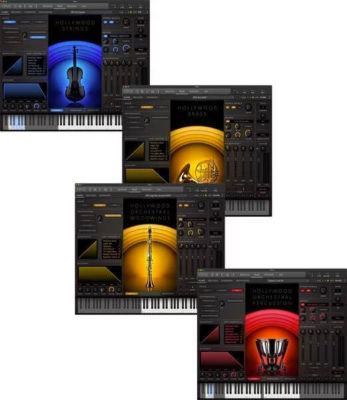 For Hollywood Orchestra Opus Edition, EastWest reimagined its predecessor's content, updating it to take advantage of their leading-edge OPUS software engine. This virtual instrument's Hollywood Orchestra Woodwinds library got the most obvious makeover — its existing content was overhauled then bolstered by new ensembles, including three bassoons, three clarinets, and three flutes. You also get fat-sounding string, brass, and woodwind multi-ensembles that faithfully capture the vibe of a large orchestra playing together in a live setting.

Under the hood, Hollywood Orchestra Opus Edition boasts EastWest's new-and-improved OPUS software engine. Developed by coding guru Wolfgang Kundrus, the mastermind behind Cubase, Nuendo, and Studio One, along with Wolfgang Schneider, the creator of Kontakt, OPUS is a worthwhile successor to EW's previous PLAY engine. The OPUS engine was built from the ground up to be faster, more powerful, more flexible, and more eye-grabbing than PLAY, with enhanced features like individual instrument downloads, customized key switches, new effects for the mixer page, scalable retina GUI upgrades for legacy products, a powerful new script language, and loads of instrument-customizing features. 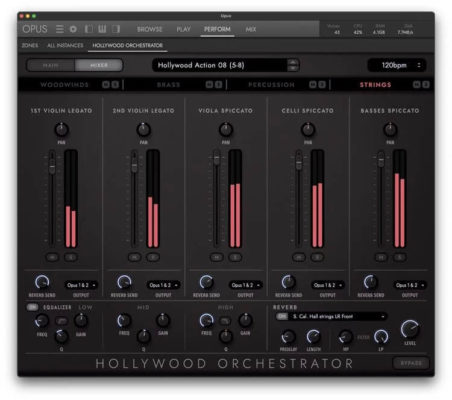 Setting the right MOOD is a piece of cake 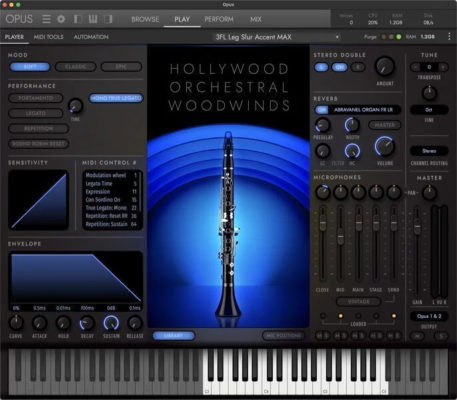 Tailoring the sound of Hollywood Orchestra Opus Edition to fit your project's vibe is easy, thanks to its MOODS feature. Programmed for Diamond Editions that include all mic positions, MOODS permits you to effortlessly switch multiple parameters to match the feel of your project. Classic MOOD replicates the original Hollywood Orchestra's sound. Soft MOOD is great for — you guessed it — softer, emotional passages. Epic MOOD delivers a heavy-hitting sound that's tailor-made for action scenes. The Opus Edition's interface even changes color to match your MOOD setting!

Hollywood Orchestrator: don't compose without it

EastWest Hollywood Orchestra Opus Edition includes Hollywood Orchestrator, one of the most powerful composition tools you'll ever use. With it, you'll be able to build complex orchestral arrangements by playing a few simple chords with one hand and shaping expression with the other. Hollywood Orchestrator's revolutionary Scoring Engine is akin to a secret weapon, producing anything from a rudimentary string arrangement to full-scale orchestrations. The Scoring Engine employs a 2-step process that first modifies your MIDI input with a Note Selection process, then sends those notes to a Step Sequencer that plays chords with programmed rhythms. 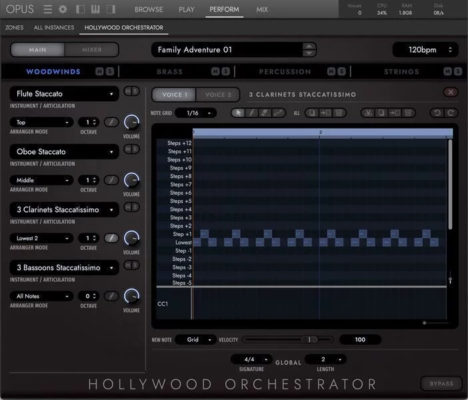 You also get a mixer section with per-instrument volume, pan, EQ, and an ultra-configurable reverb. And with 500-plus customizable presets, creating Hollywood-ready scores is a breeze.