‘MiniMonsta‘ by GFORCEcomes with over 6000 factory patches (including many from Rick Wakeman). All original features including 3 oscillators and the famous 4-pole, 24dB/octave filter. Additional LFO & ADSR for modulation of almost every parameter making it the most programmable one.

‘MiniMonsta‘ by GFORCEcomes with over 6000 factory patches (including many from Rick Wakeman). All original features including 3 oscillators and the famous 4-pole, 24dB/octave filter. Additional LFO & ADSR for modulation of almost every parameter making it the most programmable one.

MINIMONSTA IS AN AWARD WINNING, HIGHLY DETAILED AND ACCURATE EMULATION OF THE ORIGINAL INSTRUMENT WITH HEAPS OF ATTITUDE.

We think of it as a Mini emulation on steroids because, until Minimonsta, numerous clones simply attempted to copy the original instrument and then add one or two features such as polyphony and another LFO, Minimonsta takes a radically different look at this vintage masterpiece and operates on two levels.

It comes with over 6000 factory patches (including many from Rick Wakeman). All original features including 3 oscillators and the famous 4-pole, 24dB/octave filter. Additional LFO & ADSR for modulation of almost every parameter making it the most programmable one. 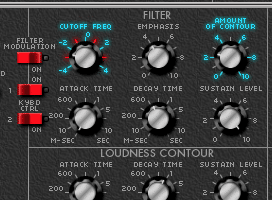 Filter Section
The Minimonsta filter was modelled from an early generation Minimoog complete with its own foibles and unique character, and as such it will sound slightly different to other Mini emulations. This is entirely deliberate. 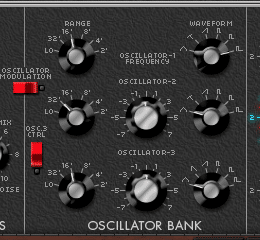 Oscillator Section
As per the original instrument, three oscillators with selectable waveforms for each provide the starting point for your sound. Oscillators 2 & 3 can be tuned against Oscillator 1 and additionally, Oscillator 3 can functions as an LFO. 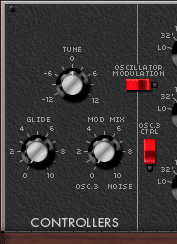 Controllers Section
Set the global tuning and glide time. Minimonsta’s portamento is Time Constant, which means that glides are faster over larger intervals. When Oscillator 3 is used as an LFO, MOD MIX determines the mix between the oscillator tone and noise. Mixer Section
This is where the levels of the three oscillators and, if required, a noise generator and/or an external signal are mixed. In this section we have also painstakingly recreated a famous Mini trick called the Loop Feedback function. 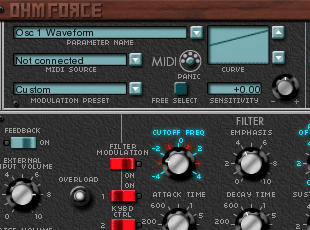 MIDI Mod Section
Minimonsta contains an extensive and highly flexible MIDI Control Section where incoming controller information such as velocity, after-touch, and CCs are assigned to parameters. A full range of MIDI response curves are also available to help tailor your sound to your playing style. 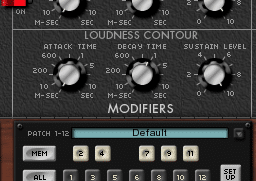 Amp Envelope
In conjunction with the filter envelope section above, this section provides the amplitude envelope controls allowing you to shape Minimonsta’s sound. Settings Section
Unlike the original instrument, which was only monophonic, Minimonsta has several additional keyboard modes that are selected via this section.

Delay & Output Sections
Complement your sound with the on-board stereo delay and set the pan position of your output signal. Adding an LFO to Pan or Level can provided sound interesting movement to your sound. 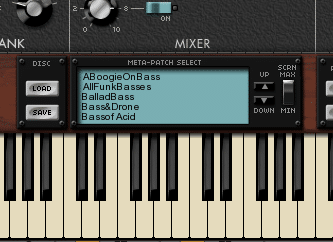 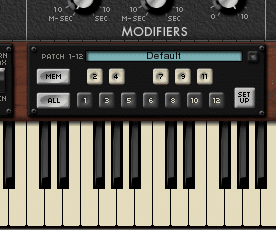 Patch Memory Section
Instrument Meta-Patches are loaded here. A Meta-Patch is comprised of 12 Patches. Patch 1 being the fundamental sound with Patches 2 – 12 variants thereof.

Melohman Morph Controls
The octave (of black keys) used for real-time morphing between Patches is set here along with the morph time.

MINI
Firstly, on the Mini level you have all the features and sounds of the Model D including accurate waveforms, a painstakingly accurate resonant filter, snappy ADS envelope generators and the wonderful Mini loop-feedback function. Using just these parameters, Minimonsta has a huge tonal range from fat to fierce and from searing to sharp sizzles. However, there is also another dark side to the beast, and it’s here where you can unleash a full-on Monsta.

MONSTA
Instead of being shackled to a single LFO as per the original instrument, it’s possible to assign an LFO to almost any original Mini parameter including filter cutoff, resonance, individual oscillator volumes, even each envelope parameter. What’s more, each LFO has several waveforms, sync, and delay options from which to choose. Additionally, for every parameter to which you can apply an LFO, it’s also possible to apply an extra ADSR.

Finally, there’s also the ability to assign MIDI modulation to any original Mini parameter and create effects such as dynamic glide times or velocity response to filter (both positive and negative). Put simply, the scope for sound design and sonic creativity is limitless.

MELOHMAN
And if the above isn’t enough, you can also dynamically morph between twelve patches within a Meta-Patch thanks to the unique Melohman octave. This takes a static software instrument and adds serious performance and dynamic real-time control possibilities – a boon to those real players out there who want to add life into their performances while remaining in constant contact with the keyboard.

With the extra LFOs, ADSRs, hugely versatile dynamic MIDI control and the Melohman octave you’ll soon realize while there are many Mini clones out there, there is only one true Monsta!

Minimonsta is a virtual instrument in the following formats:

Minimonsta is a 32/64 bit virtual instrument in the following formats:

Standalone
VST
The minimum system requirements are as follows: